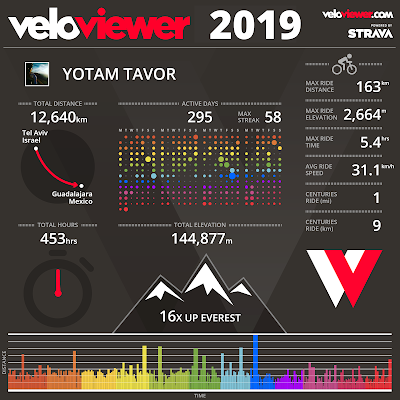 94% of those kilometers were indoors.
It was my most active year in a decade.
My oldest child (of 3) is ten, so it kind of matches.
2015 was strong, and I also had a few podium finishes, including one on the National Championships (for CAT, Masters B). Still, there's a direct correlation between the occurrence of an offspring and a reduction in cycling volume.

A brief history of time:

In May 2018, I decided that I'm going to ride the Alpen Brevet in Switzerland, only three months or so away.
This followed 2.5 years of practical inactivity:


Then in June 2018, I started to get things in motion with Zwift's Fondo plan.
I managed to ride about 40hrs/1000km in training before the August event, which was pivotal.
I knew I was light years away from my podium form, yet rode on in the freezing wet, snowy, foggy, miserable weather the Swiss Alps had to offer.

In October 2018, I started Zwift's Build Me Up plan (I did it for the vSocks). Rode a little with my group IRL, and did the Zwift Academy, which had always brought me to new highs. I rode all the Zwift Gran Fondos and other longish events/races like the L'Etape du Tour, etc. Won a B Cat climbing race and got some other good results.
FTP test in Dec had me back in familiar territory, around 260 watts (~3.8w/kg).
I hit the ground running in 2019 with Xert from day 1.

I switched from Xert to The Sufferfest in the summer and went full-on with a SUF plan in September.
My volume was slightly higher with Xert, as most workouts are longer than an hour, but I would have likely plateaued at some point. With Xert's "choose the rider you want to be," I focused on my comfort zone strength while never pushing where progress could be made (i.e., increase MAP to push FTP). I would never have selected 5-min power as a target without understanding my 4DP and what I had to gain.
With this understanding, though, Xert can undoubtedly be a useful tool and offer some variety to the training routine.

As a reminder, I'm hunting for gains and wanted to incorporate Strength training to my structured cycling plan. I've been in and out of weight lifting for years, looking to increase fiber engagement for more watts at the same weight, more or less.
Only The Sufferfest let me easily incorporate both without trying to merge separate plans on TrainingPeaks and figuring out how to schedule and balance both the strength and cycling on the calendar.
In a word: Lazy. Spoonfed.
And, as well noted in "Do as you're told":


I'm here to suffer, not think.


So now, I'm enjoying the accumulated fatigue of the first month and having a more relaxed week.

The last couple of weeks were tough.
I expected as much too. Having increased my MAP and FTP a few weeks ago on the Full Frontal 4DP test, I now found myself pushing "tempo" at what was "FTP" just a couple of weeks ago. Yikes.
Also, my SO was away overseas for the week, and kids were on holiday, so I shifted all the rides to the evening, which is not my usual preference. Just a bit more tired, physically, and mentally.

Blender - it hurt a little more this time, but fun nonetheless. I love those time-trial efforts at the end. I really do.

G.O.A.T - fun. I could do this all day long watching the Swiss Alps, having climbed many of these passes myself.

Nine Hammers - this is where the fun stopped.
There was more at play here, with the fan not working, riding at night instead of morn, and the leftover porridge I had a couple of hours before. Long story short, I saw that porridge again on the 9th Hammer.

Then onto some Strength work and drills before:
Defender - I was actually happy about this ride and keeping HR under control even though it's a Z5-4 ride.

ISLTA - a real test. It was the 8th time I had enjoyed this workout. Attack. Attack. Attack and Attack. With the higher power targets, I was beginning to struggle towards the end. Sort of like the first time I rode it.
I know that next time we'll meet it will be easier. And, in just a few short weeks, it will feel like a solid tempo ride, but this time I had to reduce the load in the final minute, or I would have come to a standstill. I hit slope mode for about 30 seconds to bring cadence up, then returned to ERG for the final push.
Then, I kept AR pace for another hour for some silly Zwift route badge.

Felt totally cooked after that, and now the rest week is more than welcome.

And in other news

Still thinking about the Tour Of Sufferlandria, a Knighthood attempt, and some other cravings as Zwift release more events, races, etc. (Zwift Fondo, Tour of Watopia, etc.)
Also eyeing some real-life Gran Fondos in a few months, but I'm not making any changes for now, as completing this current plan is the Priority (there's no point adding the  "#1" since there can be only one priority).

Can Mt. Sufferlandria be a moving target? Indeed, it can.