- February 22, 2020
Violated. Quite simply.
That's what Violator will do to you, for two primary reasons:


The complicated thing about Violator - the 5th ToS stage, is that a sprint is a sprint. Meaning, you go all out.
Sure, The Sufferfest app gives power targets, but this session is done in Slope/Level mode because the timings are too fast for my Tacx Neo to respond, so yeah, the target might be one thing or another, but I'm eating stem anyway so whatever.
I did reduce the slope for each set to match the reducing slope of the power curve, but it hurt nonetheless. The last set has just 5sec recoveries, so it gets silly.
So that was ToS Stage 5...

Then came Wednesday.
Because of domestic obligations, I can only ride in the late evening after the kids are asleep on Wednesdays.
Today though, I fell asleep before the kids :D
So while I had the Torture Chamber ready to go for Stage 6, I involuntarily took a rest day. I earned this rest day earlier by riding multiple stages on the same day, so no lost ground as far as the ToS goes. 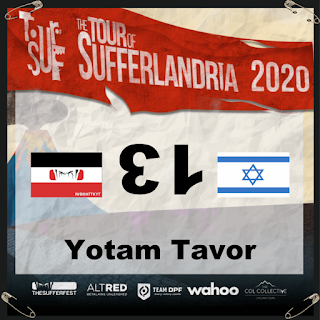 Stage 6 was a 2x20min FTP session called Hell Hath No Fury - which is usually no big deal to me as sustained efforts are certainly a strength and over/under works keeps me focused.
This time, however, things were a bit different.
As promised, I did not forgo my Strength training for The Tour and preceded this ride with nearly 50 minutes of bodyweight drills, leaving me somewhat depleted. Add to that the accumulated fatigue in the form of ~700TSS for the week, and you may imagine the faces I pulled during this ride.

Stage 7 quicky with "Igniter": 20-minute killer "warmup" that hurt more than most 1 hour sessions.
Immediately after, came "Joyride," which I will undoubtedly do again because, as the late time of day I got to riding, the TV's volume was turned way down, and I could tell I was missing out on some good entertainment.
Alas, the fan was the only thing I heard.
The ride itself was great; I have slightly reduced targets for the "Focused" option, so the majority of the time was spent in Threshold, rather than VO2max. Rather easy, all in all.

Stage 8 comprises of "The Tool Shed" and "14 Vise Grips".
Because of my grandiose plans for Sunday, I'm going to split these two up.
The Tool Shed looks like the best fun in the world, with 5 intervals from "9 Hammers" and a set from The Sovel in between. I'm drooling at the thought of riding this session at 100%! However, I must ride it at a very low intensity for my plan to work.
So, I hereby commit to riding The Tool Shed at 100% as soon as I'm done with this adventure.
I hit The Tool Shed at 70% today because of tomorrow:

I'm going to start with 14 Vise-Grips and finish Stage 8, then plunge directly into Grunther Von Agony's Gran Fondo, followed by a nice little collection of rides to become a Knight Of Sufferlandira.


This will take anywhere from 8.5 hours to 10, depending on how many breaks I take (max 10min between each!).
I am going to get 3 Achievement Badges in one day.

The ride is going to be recorded on my Garmin and Zwift.
The Garmin is a funny story because it's an Edge 810 I got brand new under warranty after the previous one I had for two years stopped charging because of the crappy mini-USB port. The last recorded ride on it was from October when I went with the kids for a ride. Then one in Sept, and one in Aug. I guess that's a firm statement of my "Indoor Specialist" status.

On Zwift, to keep things interesting, I'm going to attempt a Double Uber Pretzel.
The Uber Pretzel covers nearly all roads on Watopia and climbs everything. It's ~128km and 2400m gain.
I've ridden it before on several occasions. Once in a non-drafting race taking ~4:20 and once in a drafting-race for about 4:00 (although my computer reset with 4km to go, so it isn't "in the books.")
These were at race effort, though, so I am not going to be anywhere near that tomorrow. Probably looking at 5 hours per lap.
The other problem with the Uber Pretzel route is that it's a single lap, meaning I will have to navigate manually once the first lap is done. It's a pain in the ass, but I think it will actually help keep me engaged and focused on this ride.
So I've mapped it out and written down the turn-by-turn directions. I'll need to navigate back to the Downtown Start Banner, flip a U-turn, and ride the Uber Preztel again.
I'll keep a close watch on the timings though - because I have to finish by around 2 pm, if I see that it's going to be impossible to ride the route twice, I'll let the Zwift gods "Surprise Me." Don't know yet... One thing I do know is that if I end up riding it twice and finish the Knighthood ride before finishing the route, then I'll keep going to the Alpe Du Zwift summit (and back down...) this might stretch the ride beyond the 2 pm deadline after which hungry kids will be all around me making it tougher than anything The Sufferfest can throw at me.