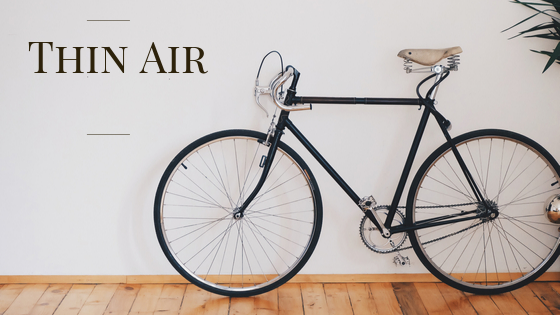 As the burning haze engulfed me, blurring my vision and scorching my lungs, I recalled the mystical counterspell: "You. Can. Do. This."

It was still more than forty-five minutes to the end of the session, and my inner thighs began to cramp up.
I don't remember if this was on Mt. Sufferlandria, Mt. apocalypse, or some other Col du-know, but I hurt, and I had to keep going.
I knew that with these cramps - pure physical pain, almost mechanical, like someone or something literally and visibly pulling ligaments and muscle - I had to go on.

To Stop is to Die.

It Seemed Like Thin Air is a Sufferfest video that has "tempo" climbs at various lengths.
The shortest is 8 minutes, the longest is, um, 40 minutes.
Now "tempo" is a relative thing. Yes, it can be constrained in Power Zones or HR zones, but when you're fighting it out on The Longest Stage of the Giro with Nibali and his buddies, this "tempo" ride is seasoned with surges, attacks, standing, sitting, standing some more, a few sprints to the line, and high cadence efforts to really make sure that this session leaves a trauma to both mind and body.
So it's really good!

Last time, as written before on the scrolls of "A Knight To Be," I rode this session prior to taking the 4DP Full Frontal Test and hoped/imagined it would be somehow different this time.
It was. Harder.
Nonetheless, even with the Cramps returning towards the end, I got through it.
I did not let up for a moment; I contended with each second.

And on to the Fabled Rest Day.

Now, I don't know where you live (although Google Analytics can tell me!), but here in the Holy Land, they have this thing called Yom Kippur (AKA Day of Atonement) and traditionally, NO CARS ARE USED.

This escalates in mere seconds to "National Bicycle Day."
No cars on the road, in the entire country, mind you, means hours and hours of open roads, kids racing in all possible directions, and a wild assortment of death traps one witness these days in eBike eScooters and more life-duration-reducing-devices.

As it stands, my middle son of 7 years, had made it a tradition to ride on this day and to increase distance by 30km annually.
First year, it was a 30km journey, a fine feat for a 5-year-old.
Last year, he refused to come home before the Garmin noted 61km. Had to be sure.
This year (yesterday), he aimed for 90km but fell 10km short due to no fault of his own.
I had a flat, and while I ride tubulars, we still headed home for a bike change, and his older sister, who tagged along with us, developed a fever mid-ride, so while exchanging bikes, we also deposited her back to the sanctuary.
It cost us some time, and so we finished the ride just as the sun set, and cars returned to the road.
Long story short, my "rest day" was 80km ride. Albeit at Recovery Pace / Z1, it still took 5 active hours and nearly double that in elapsed time.

Tan lines are fantastic, though.

I finished the day off with some Yoga (recovery booster) and the MTP session on Improving Focus.
This is a rest week, so relatively short and "easy," yet Couchlandria remains afar.
Cadence Mental Toughness Rest The Sufferfest